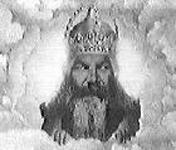 Here is an oldie but goodie that someone requested I post to my blog. I have only posted the first few paragraphs of it, with a link to my TBK website.

What Is God?
Is God a giant man in the sky? No, God is the life force pervading the cosmos
by Acharya S

"Beware of the man whose god is in the skies." --George Bernard Shaw.

"The idea that God is an oversized white male with a flowing beard who sits in the sky and tallies the fall of every sparrow is ludicrous. But if by 'God' one means the set of physical laws that govern the universe, then clearly there is such a God. This God is emotionally unsatisfying... It does not make much sense to pray to the law of gravity." --Carl Sagan

"I just read your essay titled 'What is God?', and before I look any further into your site, I'd like to tell you that I found it the most truthful piece of spiritual writing I have ever read. So concise, a real stimulation unhindered by myth, parable and occult symbolism." -- S, Australia

What is God? Is God a giant man who once incarnated as his own son 2,000 years ago through the womb of a woman in the Middle East? Certainly not. Is God a man who created everything we see? Wrong again. These stories are just perceptions filtered through the limited human mind. They are not ultimate truths. Is God male? No way. This is an erroneous interpretation by the male ego.

"God" is the Life Force

One can think of God as the life force or sentience that permeates the cosmos, gravity or levity, it matters not. As an example of such an energy, one can take a plug and stick it into an electrical outlet - this is what becoming spiritual is all about. One becomes plugged into "God." But think about that electrical life force: It has no form. In other words, it's not a human being. It has no gender; it's not a male. It has no color; it's not white. It has no size and no container. That life force, or "God," is not a giant white man, as we have been told, who can mysteriously incarnate himself through the womb of a virgin of any particular ethnicity. Rather than being historical, these are myths that are merely symbolic for the creation of matter out of spirit.

In the Far East, this life force has been discerned as and termed "the Tao." The Tao is the "thing" that makes birds chirp, cats purr and the sap of the trees run. We can also call it cosmic consciousness. It is simply an energy, sentience or spirit that pervades all things. Far from having gender, as we have been led to believe, it is the magnetic principle between the male and female potencies. It is also the male and female polarities themselves. This Great Spirit, Tao, or God, encompasses all things. If it is not all-encompassing, it is not God. Anything less than the total is not God. The definition of "God" is omnipresence itself. Nothing is outside of "God."

I just finished read "Dark Names: A secret history of Necronomicon" -- 2006 by Simon.

Anyway it gives a really good analysis of the rise of religion in Sumerian culture and the connection to monotheism. I connect this with Professor Brian Fagan's book "The Long Summer" which documents how desertification from civilization spreading after the rise of the Holocene "summer" on Earth created a Reichian "psychic armor" -- aka monotheistic religion.

Anyway for me God is "empty awareness" which creates the life force. A consciousness guiding energy. But then since we exist within this consciousness we really can not separate ourselves from it, nor the energy it creates.

I really like Master Nan, Huai-chin's books on god and religion, but then he's a Ch'an Buddhist professor in Taiwan and a yoga master.

He's not read much in the U.S. but he's a best-seller in Asia.

AKARYA- HELL O
WHAT IF ALL YOU DO IS EXACTLY WHAT THEY DID? THE TRAN SLAY TORS OF THE ... GO SPELL ...AND NOT THEY NOR YOU HAVE ANY CLUE ABOUT WHAT YOU ARE TALKING ABOUT... AND JUST PLAY IN MUDDY WATERS?
ONE THING FOR SURE THEY , THE SLAYERS, OF THE GOSIP, HAD FULLFILLED THEIR MISSION, 4 YOU ARE DOING EXACTLY THAT...GO SSSSIP AND SPECULATE.
THE GOOD THING YOU R DOING IS TO OFFER JUST ANOTHER SIDE OF THE SAME COIN, ONLY THAT WHEN THE ORIGIN WRITERS COMPOSED THEIR MASTER PIECES, THEY KNEW WHAT THEY WERE WRITING AND WHY, WHAT CODE TO USE , SO IT WILL APPEAR RIGHT TO SOME AND WRONG TO OTHERS, YET THIS TEXTS SATISFIED ONLY THOSE WHO ORIGINALY WEAVED , TWISTED, SEALED ALL THEIR KNOWLEDGE, THE TRUTH BEING AVAILABLE ONLY TO THOSE WORTHY OF IT. IT TAKES A SPECIAL SKILL , TO BE ABLE TO UNDERSTAND THE MESSAGES, AND THE TEXTS, FOR THEY ARE NOT WRITTEN FOR THE MASSES... . IF YOU ARE ABLE TO GET THE CODE, FOR THERE IS A CODE, 100%, THEN YOU WILL STOP IN YOUR TRACKS, PUZZLED, MARVELING AT THE BRILLIANT MIND OF THIS ' PRIMITIVE PEOPLE' , THE INVENTORS OF EVERYTHING.
I AM NOT JUST THROWING ROCKS IN THE WATER AND CUT LEAVES TO DOGS, I KNOW WHAT I AM TALKING ABOUT...WELL IT IS FREEDOM OF EXPRESSION , AND SO EVERYBODY CAN INTERPRET AS LONG AS THEY WANT, AND IF THEY MAKE A BUCK OR TWO, YNOT. BUT IF YOU WOULD CARE ABOUT PEOPLE YOU WOULD EXAUST ALL POSSIBILITIES , WHICH ARE ...OHH...ARE MANY, AND ONLY WHEN YOU BELIEVE WITH ALL YOUR BEING YOU KNOW WHAT YOU R TALKING THAN GO OUT THERE AND SAY IT AS IT IS...OTHERWISE...LET THE DOGS BARK...SAY NOTHING, SEE NOTHING, HEAR NOTHING AND THEN YOU MIGHT SEE AND HEAR, AND YOU'LL BE FROZEN IN YOUR PATH UNABLE TO UTTER A WORD, RISING AND FALLING , WHIRLING , SPINNING, WITENESSING TO THE VOICE OF THE SILENCE...THE UNBARZEDEDE...DATALKHER...DANUSEMOARENU...
THOSEWHOHAVEEARSPLUGTHEM...
THOSEWHOHAVEEYESPLUKTHEM....
YOUTHINKUKNOWBUTUDONTKNOWWHENUTHINKUKNOW.