My forum mod's put together a post on the pagan parallels to the "life of Christ" constantly bandied about around the internet. In my book The Christ Conspiracy, published in 1999, I included several lists of parallels from the "lives" of various pagan gods and heroes. These parallels lists have been reproduced all over the place, and they tend to create apoplexy in the faithful and others ignorant of the research behind them. I updated these parallels lists in my revised article "Origins of Christianity," which you can find linked in the attached forum post.

I've stated that, based on Christian apologists' frantic behavior in "debunking" these various lists and parallels, this part of Jesus mythicism appears to be the "Achilles Heel" of Christianity, as it demonstrates that, rather than serving as "divine revelation," the faith is a rehash of the religious and mythological notions current and popular at the time of its creation.

Despite the hysterical "refutations" generally indicating ignorance of the subject, the parallels are real and not to be dismissed. And they do indeed expose Christianity as a remake of pre-Christian religion and mythology, as much of the rest of my forum, websites, articles, books, ebooks, videos and radio programs also demonstrate.
Posted by Acharya S at 12:30 PM No comments:

My Response to Mark Foreman

My Response to Mark Foreman

Attached is a letter I sent to yet another "little liar for the Lord," Liberty University's Mark Foreman, who somehow believes that, even though I am clearly not afraid of being tortured in eternal hell by his all-powerful "loving" Master, HE can intimidate and bully me into submission.
Posted by Acharya S at 6:31 PM No comments:

Is Jesus a Myth? by S. Michael Houdmann, DEBUNKED

Is Jesus a Myth? by S. Michael Houdmann, DEBUNKED
Posted by Acharya S at 7:13 PM No comments:

Did Jesus Really Exist? by Paul Maier, DEBUNKED
Posted by Acharya S at 7:12 PM No comments:

Richard Dawkins on Christmas and Zeitgeist Part 1
Posted by Acharya S at 7:11 PM No comments:

Did the Dogon Know about Sirius B?

Did the Dogon Know about Sirius B?

Hot off the presses! Pass it around, post it wherever you see misinformation. I think the reality is far more fascinating than the fictional "alien" paradigm created around this phenomenon.
Posted by Acharya S at 7:26 PM No comments:

The Star of Bethlehem/in the East, Three Wise Men/Kings, Sirius and Orion

The Star of Bethlehem/in the East, Three Wise Men/Kings, Sirius and Orion
Posted by Acharya S at 1:07 PM No comments:

We've now got a new special that includes all four of our Astrotheology Calendars. U.S. and Australian residents can get all four for a 35% discount. Even though they are from the past years, these calendars will make great Christmas gifts, as they are full of fascinating information about the world's religious traditions and ancient ruins.
Posted by Acharya S at 4:56 PM No comments:

Richard Carrier stumps for ignorance
Posted by Acharya S at 2:05 PM No comments: 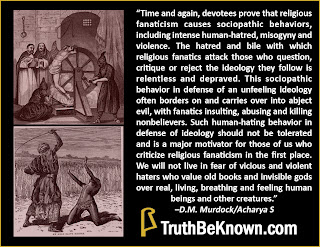 What is the Blood Moon? Will Jesus Return?

What is the Blood Moon? Will Jesus Return?
Posted by Acharya S at 2:51 PM No comments: