"Who Was Jesus?" Controversial Book! 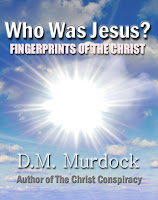 Just in time for Christmas is the release of my new paperback Who Was Jesus? Fingerprints of The Christ, published through my company Stellar House Publishing.

In this highly controversial book I demonstrate that the gospel accounts cannot be taken as "reliable history." Instead they constitute propaganda created by the priesthoods of the time for a variety of purposes, including usurping the other gods of the Roman Empire. In this CSI-style investigation, it becomes clear that there simply is no credible and scientifically valid evidence that Jesus Christ even existed, much less did or said the things in the New Testament, which aren't always very "godly" or moral.

Who Was Jesus? Fingerprints of The Christ
Posted by Acharya S at 6:45 PM No comments:

The Islamization of Europe

This video is a speech by British politician Nick Griffin at Clemson University on October 24, 2007. Mr. Griffin is well educated about Islam and what is happening in Europe as I write. The figures he gives are alarming, to say the least.

"In France...70% of all prisoners in French prisons are Muslims."

"...the rural areas of Norway now are literally filling up with middle-class liberals fleeing from Holland, where their ideology has helped to create in Holland a multicultural society which is set to be taken over by Islam, so now, the ones with the money are running away from it."

"The Parliamentary Commission in Holland last year concluded that by 2017 at the very latest all of Holland's cities would be majority Muslim."

"More than half of all school-aged children in France in 10 or 12 years will be Muslim."

"In Denmark, Muslims at present officially make up 5% of the population, but they take up 40% of all the money spent on welfare benefits."

And so on. Everyone needs to watch this video. This phenomenon does not end with the Atlantic Ocean but is finding its way, slower but as surely, across the Pond into Canada and the U.S. Australia and New Zealand are also being challenged in this regard. So far, South America remains relatively untouched, but there are growing settlements there - at this point largely terrorist operations - poised to assault the United States as well.