For the past couple of months, Google has been suppressing my website TruthBeKnown.com so that it doesn't come up in the search engine results. The reasons for this suppression are unclear. (Google is never clear about such things.)

In order to remedy this situation, I have completely gutted and redone my site, and have been patiently waiting for my site to be reinstated, to no avail. As it stands, no one can even find my site by doing a search on my name! The same thing occurs with numerous search terms that I continue to rank well with on Yahoo and MSN, whose policies appear to be more reasonable at this point and whose search results in this case are obviously much better at this time.

Since my site is certainly not in violation of Google's "Terms of Service," I have to wonder what this penalty is really about at this point. My website is an "old, trusted authority site" online for almost a decade, with thousands of inbound links, many of which are also from trusted authority sites, such as .edu. Is there some type of bias going on, or will Google finally stop suppressing my site so that their search engine results are more appropriate?

Whenever someone does a search on Google, there is a link at the bottom in a blue box that says "Dissatisfied? Help us improve." If one clicks on that link, a box will come up regarding the relevant search term, asking for a reason "why you were dissatisfied with the search results." There is also a space for a URL/link that one would expect to see when one searches for that term, such as http://www.truthbeknown.com

If one tries to do a search for "Acharya S" or "Truth Be Known," my site should come up at the top - which it used to before it was being suppressed. It may be that Google responds to these "dissatisfaction" comments, if one is inclined to make them. Perhaps the more (polite) comments Google receives, the more attention it pays to problems.

Every day this situation goes on is another day that people can't find my site or any of its many original articles.

As another example, my site used to rank no. 1 for "origins of christianity," which would get a person to http://www.truthbeknown.com/origins.htm It still ranks right up there on Yahoo, but in Google it's nowhere to be found.

Ditto with "quotes from the koran," which used to bring up http://www.truthbeknown.com/islamquotes.htm

There are many more examples like these. Again, obviously, my site is being deliberately suppressed by Google.

Thank you for your attention to this important issue. Hopefully this situation with Google can e resolved soon.

(FYI, last year Google suddenly de-indexed the entire TalkOrigins website because of a hacker issue. Fortunately, after much rabble-rousing Google reinstated the site.)
Posted by Acharya S at 4:35 PM 42 comments: 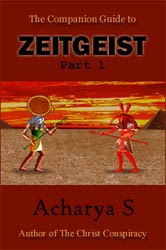 I am delighted to announce that I have recently completed a new ebook called The Companion Guide to ZEITGEIST, Part 1.

If you liked the hit viral movie ZEITGEIST, you'll love this ebook.

The Companion Guide to ZEITGEIST backs up a number of the most important claims in Part 1 of the movie - claims that have caused a great deal of debate in forums all over the net!

If you want to know the truth behind some of those claims, you need this companion guide.

Instantly downloadable and printable - get your copy today!

The Companion Guide is endorsed by Peter J., the creator of ZEITGEIST.
Posted by Acharya S at 12:45 AM No comments:

This show will be LIVE, but it will also be archived in case you miss it.

Be sure to listen in!

Acharya S
Author, The Christ Conspiracy: The Greatest Story Ever Sold
Suns of God: Krishna, Buddha and Christ Unveiled
Who Was Jesus? Fingerprints of The Christ
Posted by Acharya S at 5:45 PM 2 comments: