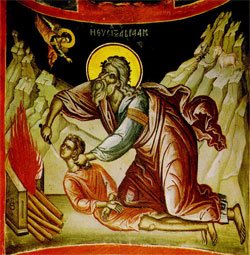 Nice precedents there. The pathology produced by this book and its foul inhuman stories is unimaginable.
Posted by Acharya S at 2:09 PM

Yes indeed! This god is nothing but the ideal destroyer--perhaps part of the Hindu trinity (was that Shiva the destroyer?). He is certainly not the creator god, nor creative. His whole pupose is to demean, harrass and goad his followers to be like himself--a murderer, pervert, child killer and all round murderer. He is the desctructive principal inculcated in his chosen people (or did they choose him?!).

So beware you "bibliophiles"--you also are nothing but born in sin peices of shit to be used and abused as your master sees fit. that includes you self-believing "chosen" Jews and you Christians on your knees supplicating this Jewish intellectually and emotionally unstable god. He is all yours!