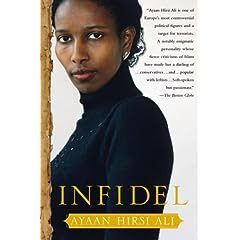 In her autobiography Infidel, the brilliant and beautiful freethinker Ayaan Hirsi Ali cuts through the irrational rationalization of the world's most brutal and oppressive ideology: Not "radical Islam," but ISLAM, period. And Hirsi Ali should know, because, as she explains in her book, she was for many years a very devout Muslim. As an outward expression of her ardent devotion to Islam and its god Allah - even before it became more "fashionable" where she lived in Africa - Hirsi Ali covered herself from head to toe in a baggy cloak so that her femaleness would not be revealed and endanger her to the ubiquitous perils for women in her culture. As we should already recognize from seeing the abuse with our own eyes, the fervent claim that Islam does not oppress women - frequently quite violently - represents one of the biggest deceits in the world today, and those who constantly put forth this palpably false assertion dismissing gender-apartheid within Islam should be loudly denounced. But the highly important work of Hirsi Ali goes much farther than simply denouncing the incredibly hideous treatment of women within Islam, as Ayaan undoubtedly represents one of the greatest voices of reason of all time in a battle for the very existence of human civilization.

Horribly mutilated at the age of five at the harsh hands of her stern grandmother and a local barber with a pair of scissors who cut off her genitals like a slab of meat, Ayaan Hirsi Ali speaks out loudly and clearly that such atrocities in her native Somalia are done not only to virtually every female of a certain age, but also IN THE NAME OF ISLAM. In fact, it was surprising for her to discover that there are claims - many quite frantic and unconvincing - that Islam does not call for female genital mutilation or "circumcision," as this despicable "cultural tradition" is euphemistically and flaccidly termed. Of course, not only Muslims practice this heinous savagery, but the majority of women and girls with disfigured genitals - an estimated 140 MILLION worldwide at the time of this writing - ARE Muslims, and such oppressive barbarism goes hand in hand with an ideology that without a doubt considers women as second-class subhumans designed mostly for sexual release, baby making and household slavery. 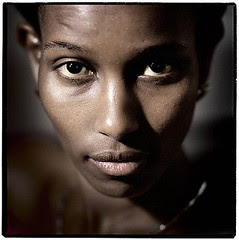 Needless to say, someone with such intelligence and wisdom as Ayaan Hirsi Ali was not content to spend her precious life merely as a piece of meat and slave. Hirsi Ali escaped this oppressive and dreadful future - and found a liberating and exquisite non-Muslim world that she could barely have imagined, based on the virulent infidel-hating dogma she had been taught since childhood. Although she does not opine that the non-Muslim world is perfect by any means, Hirsi Ali's vivid and disturbing descriptions of the contrast between what she left behind and what she discovered must give serious pause to the myriad and often trivial complaints against Western civilization. As she has said in interviews, you may spit upon the freedoms you were born with, but she cannot be so unappreciative and disrespectful, because she has literally experienced and witnessed real hell on Earth, and she is extremely grateful to have gotten out. By contrast, Western values at this current time seem like paradise - this notion is precisely what Hirsi Ali has attempted to impart over and over again in her writings and interviews. In other words, we've got it not just good but great. And this greatness is well worth fighting for - nay, it is essential we fight for it.

Despite the denials and justifications by those who cannot or will not face the horrible truth, the threat against the very survival of Western civilization is real, large and growing. If we do not wake up to this threat quickly, we will very likely find ourselves living in a world of submission and enslavement that we cannot even conceive. Hirsi Ali knows these facts to be true, as she has already lived through such a nightmare - and SHE DOES NOT WANT TO GO BACK. We who are enlightened cannot blame her at all, as we absolutely do not wish such a future for our own children - a perfectly dreadful thought straight out of our worst fears.

Do yourself and the world a favor - buy this book, read it, digest it, pass it along and support the efforts of the handful of individuals such as Ayaan Hirsi Ali in saving human civilization.

In Denmark, we have heard a lot of Hirsi Ali's story, and I am as proud of her as anyone who value freedom and equality for all.

However, we do face major problems in the Western World, and I do not see the point in perpetuating a stand-off between western and muslim mentalities (which are basically the same).

The fact remains, that all of our religious and political institutions cannot solve our common problems, and we need to be careful, and steer clear of rhetoric that supports and sustain them.