So, relatively indigenous people would like their own religion back, but the Greek Orthodox Church feels it has the right to disparage them and discriminate against them, because, in its megalomania and arrogance, it feels it alone possesses the "only truth." Well, I say, "Shove off, Greek Orthodox Church!"

As a philhellenic, I would much prefer to see Greece embrace its glorious past, including its extraordinary ancient mythology, rather than this repulsive foreign intrusion of horse hockey called Christianity. The Greek Orthodox clergy should be considered traitors to the Greek culture, frankly, as they cast aside their homegrown traditions and gods, substituting in their stead a Jewish man to be worshipped as the god of the cosmos. "Out, out, damned spot!"

Naturally, I am not one for bringing back the attendant idiocies of slavery and human sacrifice, or compulsion in worshipping these fabulous gods. Just allow them some breathing room as imaginary friends who can sit alongside the fictional Jesus Christ - or toss his sorry arse out of Mt. Olympus. 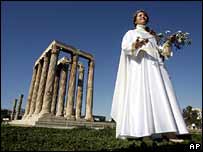 The temple of Zeus has not been long unattended by priestesses

Worshippers who believe in the 12 gods of ancient Greece have held a ceremony at the Temple of Zeus in Athens.

This is a landmark event to celebrate official recognition of their religion by a court last year.

The Greek Orthodox Church has said they are miserable resuscitators of a degenerate dead religion.

But the ceremony went ahead, with crowds watching priests and priestesses, who said the event was a symbol of their civic rights.

In 2003, white-clad worshippers performed an illicit ceremony at the Temple of Hephaestus, just below the Acropolis.

At that time they were chased off the site by ministry of culture staff. 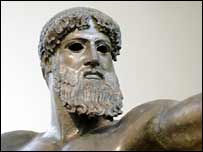 The worshippers are loyal to Zeus and the other Olympians

One of its leaders, Doretta Peppa, a writer who calls herself a high priestess, told the BBC the temples were built to respect the gods and now they were going to be put to their proper use.

Ms Peppa said she had been given official permission to use the temple, but there were fears that the culture ministry, which administers the site, might give way to pressure from the church.

The president of the Association of Greek Clergymen, Father Efstathios Kollas, has described the followers of the Olympic gods as a handful of miserable resuscitators of a degenerate dead religion who wish to return to the monstrous dark delusions of the past.

Ms Peppa and her followers aspire to have the rights afforded to Britain's druids who worship at Stonehenge, and Danish believers in Thor and the Nordic gods who are allowed to perform marriages, baptisms and funerals.

Eye on the Future

H and I always have much to say about the state of the world, and I always enjoy our shows. I'm sorry to say that she has not been well at all for the past several months.

In any event, tune in if you can!

Eye on the Future Radio Show
Posted by Acharya S at 4:17 PM No comments:

Labels: acharya, eye on the future, hehpsehboah, who was jesus

I am delighted to announce that I have just now posted online the review by Dr. Robert Price of my book Suns of God: Krishna, Buddha and Christ Unveiled. This review is long awaited, and the hard copy of it, appearing in Price's "Journal of Higher Criticism," is going to press as I write. Bob has kindly allowed me to post this preview copy online. As one can see, after the previous debacle with my book "The Christ Conspiracy," Bob has come forth to prove himself a real mensch.

Although our paths had crossed previously, I had the pleasure of finally meeting RAW several years ago, at Tim Leary's memorial service in a hangar at the Santa Monica airport. Wilson was forlorn, but, as was to be expected, made a humorous send off of that singular character.

Some years prior to that, I had sent Wilson a letter - by snailmail! - giving him the skinny on the origins of Christianity. I was delighted to receive a missive in return from him - again, snailmail! - exhorting me to "convert to Islam, and everything would be all right!" Obviously, he was being his usual funny self. Somewhere around that time, I also became friendly with a person who had spent quite a bit of time with Bob, so I was regaled with Bob Wilson stories for months on end.

The most recent "encounter" I didn't have with Robert Anton Wilson was when conspiracy maven and RAW friend Kenn Thomas and I spent a couple of hours trying to find his home in Santa Cruz, California. We had asked Bob to write the foreword to my book The Christ Conspiracy and were very anxious to see him. Alas, the foreword and meeting never occurred, but Kenn and I did very much enjoy our drive to Santa Cruz and then up the California coast.

Other than those little tidbits and having read several of his books, I don't know all that much about Robert Anton Wilson. He appeared to me to be an extremely creative person who took life by its tail and gleefully ran with it. Certainly, RAW has left an indelible mark in the thinking of hundreds of thousands.

It is gratifying to know that in his last days Bob Wilson was bombarded with reciprocated love and generosity that lifted his spirits. Of course, RAW will be sorely missed on Earth, but we know that if there's a Discordian heaven, it is richer today.

Om shanti shanti om, Bob. Much eternal love to you. Have a great ride on infinity...
Posted by Acharya S at 1:56 PM No comments:

The Reason for the Season - AGAIN?

A belated "Christmas" present - a new video based on a conversation between "Infidel Guy" Reg Finley and me:

"The Reason for the Season"

In this long but worthy video, I go into detail about exactly whence the Christmas holiday originates and what it really means, including the following:

--What is the winter solstice?
--When was Jesus's birthday traditionally placed?
--Why are the two intertwined now?
--Who else was born on December 25th?

My vids have been watched by tens of thousands of people. Here is a partial list of Acharya's Online Videos.

Wow - what a moving story! I hope this guy Wesley Autrey has a great life after this. I like the last couple of sentences: Autrey's elderly mother thinks it's "the Lord" saving the men, while his cute daughter wonders if her father is going to become Superman! Indeed, we prefer the latter. Why didn't the all-powerful Lard prevent the man from falling into the subway in the first place? Was He just trying to bring a little excitement into the lives of jaded New Yawkers? Let's give credit where it is due: Quick-thinking Autrey risked his own neck to save a total stranger. He's the hero, not "the Lord."

Look for a movie to be made out of this awesome story...

NEW YORK – When Wesley Autrey saw the man suffering a seizure fall onto the subway tracks, he jumped in to save the stranger.

As he tried to pull the man to safety at the Harlem stop, Autrey looked up.

Autrey, 50, grabbed Cameron Hollopeter, 20, in a bear hug and the pair landed in a shallow trough filled with dirty water, with Autrey on top.

The screeching train missed the pair by the barest of margins.

"In my mind, I believed, I hoped, the train had enough clearance," he said. "It didn't hit my head; it just nicked my cap."

Wesley estimated they were under the train for 20 minutes before the power to an adjacent track was cut so emergency workers could safely remove them.

At St. Luke's Hospital, where Hollopeter was taken for treatment for the seizure and minor injuries, thankful family member Jeff Friedman said Hollopeter was shaken by the experience.

Friedman, 55, of New Jersey, said Hollopeter was the son of his daughter's husband and was studying to be a film director at New York Film Academy.

"He's a talented writer, but he couldn't have written the screenplay any better," Friedman said.

Hollopeter's father was on his way to New York from Massachusetts and sent thanks to Wesley, Friedman said.

"I'd like to buy him a drink, maybe a hundred drinks," Friedman said.

The near miss occurred Tuesday about 12:44 p.m., as Autrey and Hollopeter waited separately for a downtown train.

Wesley, who was taking his two young daughters to meet their mother, said he saw Hollopeter fall on his back on the platform and begin to convulse.

After running to a transit worker to call for help, Wesley said he returned to Hollopeter, who was still convulsing and choking. Wesley got a pen from another rider and forced it between Hollopeter's jaws.

Hollopeter soon appeared to recover, and even stood to walk on the platform, Autrey said.

But then Hollopeter stumbled and fell onto the tracks, and Autrey jumped after him.

A Navy veteran who grew up in Brewton, Ala., Autrey was humble about his heroism.

"I'm just saying, I saw someone in distress and went to his aid," Autrey said.

The No. 1 train pulled in and tried to stop to avoid hitting the pair. Police said at least two cars passed over them before coming to a halt.

Tuesday afternoon, members of Wesley's family gathered at his mother's apartment to cheer Autrey's heroism and give thanks for his survival.

"It was the Lord who did it. Can you picture it? God just moved that train over him," said Autrey's mother, Mary Autrey, 69.

Autrey's daughter had a different interpretation.

"Is my daddy going to become Superman?" Shaqui, 6, asked.